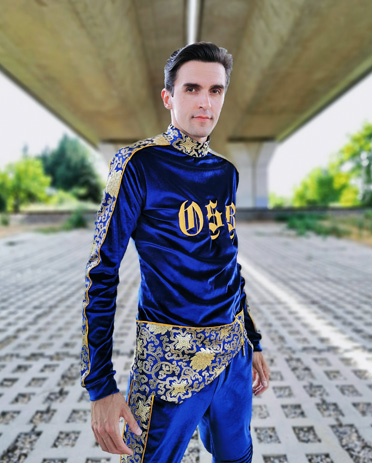 Miroslav Bruise Žilka dedicates himself into dance styles Poppin', Lockin' and B boying. In 1993 the first impulse came from D.J. Bobo and there first dance steps took place. Two years later his cousin Maroš introduced the break dance group Ex breakers from Sereď to him and here it all kicked off ...

Many years have passed - countless workouts, toil, dance competitions and performances with group Old School Brothers, street dancing in Vienna, television shows and talent competitions - up to a career as a professional dancer. 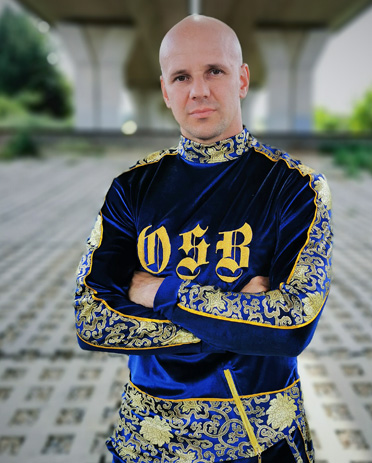 Bboy Čiko is one of two brothers and founders of the group Old School Brothers. He has been dancing since 1999, namely dance styles: Poppin', Lockin' but mainly Breakdance. He also works as a dance teacher and choreographer in the respected dance school Old School Brothers, which has made innumerable victories and successes. Bboy Čiko has also attended many competitions, jams, battles and performances throughout Europe. Among the TOP we could mention: concert of 50 Cent, Naughty by Nature, or The Game. At last, but not least, Bboy Čiko is owner of SLOVAK GUINNESS RECORD in amount of body´s rotations across the back (BABYMILLS). Bboy Čiko lives only for dance. 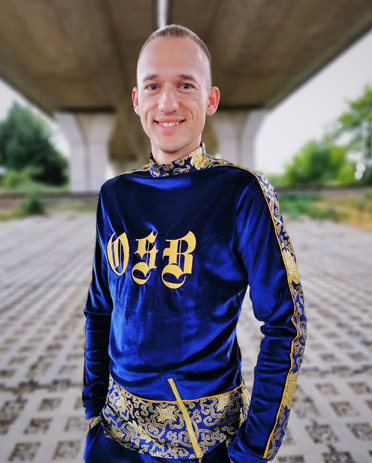 B-boy Laci began to dance at the age of 19, what makes him aproof that it is never too late to start dancing and to be successful. His first encounters with BBoying were training with friends, already active dancers who first introduced him and then inspired him to, until then still unknown to him- dance style but mostly lifestyle, the break dance. Another big inspiration in his beginning was group Flying Step's and the Finnish break beat / electro-hop group Bomfunk MCs with song Freestyler. Since his inceptionnine years has been passed, during which he has acquired experience, whether through battles or dance performances. Five years later he worked as a teacher of dance break in ZlatéMoravce. Among his favourite parts of Bboying belong “freez” and “power moves” which represent a core of this dance style. 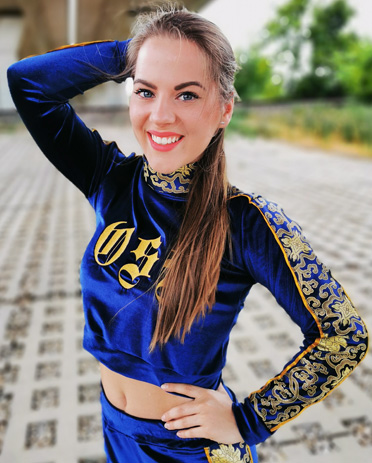 Kamila Uhrinová has danced since she was three years old. She began to dance disco style. At the age of 10, she tried hip-hop and later also break dance. For five years she performed in the musical Adam Šangala in the Andrej Bagar Theatre. She has participated in several Slovak and international competitions in dance organization IDO. The greatest success was obtaining the title of world champion in street dance show solo in 2007 and also the victory with the guys in show “Slovakia´s got talent”. In recent years she has been impressed especially by break dance, but she likes lockin and other old-school styles too. As one of few girls in dance scene she does head spin, i.e. rotationon head. She also likes the dance battles. In 2015 she won together with four other girls 5 vs. 5 battleat the Urban Dance Competition in Budapest and the bboying 1 vs.1 at the Urban Dance Camp in Budapest. In 2015, she won at the 6-hour dance marathon. Currently, she has begun to study the medicine at the Medical Faculty of Masaryk University in Brno. 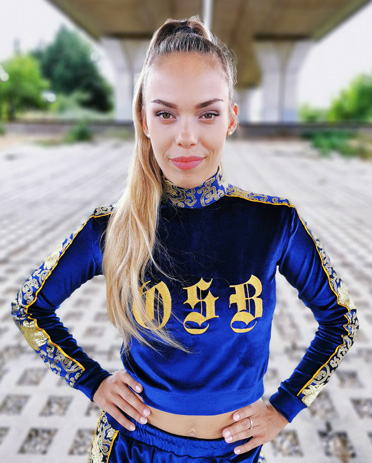 As a three-year old girl, Nikola Králiková started to dance in 1994, as a member of dance group Jumbáčik in ZlatéMoravce. From the beginning she staged across multiple dance styles such as jazz, elements of classical and folk dance to hip hop. She joined the group Old School Brothers in 2006. Since that moment, she began to devote herself to styles of breakdance, poppin and lockin. Currently, Nikola Králiková mostly focuses on the “new style”, which she teaches at the OSB dance school as a lecturer and choreographer. During her dance career, she has taken part in lot of dance competitions and battles, she performed in the musical“Street story” (2008) in the Theatre Aréna in Bratislava, she danced as a support act at many concerts (Black Eyed Peace, 50 Cent, Jay - Z, The Game ..) and also in several television shows (Slávik, Athlete of the year, Czech-Slovakia´s got talent ..). A great inspiration in dance to her are: Paris Goebel, Miguel Zarate, Lile Beniga and singer Beyoncé. As greatest achievements she considersthe Students´awards in national and international competitions. 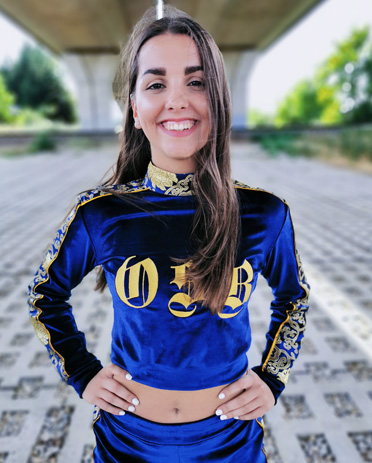 Liliana Maníková started dancing in 2006 in many dance schools, where she was mainly engaged in hip hop. She´s been dancing for 13 years. Later, however, started to work at the Old School Brothers dance school, where she was a student first,but over time was accepted by the OSB and became a member of the group. Years passed, and Lili began to dance some different styles (Lockin ', Poppin', Hip Hop).

While dancing, however, she devoted to gymnastics and workout. During dance career, she´s completed many dance battles, competitions, where she won many awards. Lili worked in various clips such as for (Majself, Kali ...) She´s also appeared on television shows (Czechoslovakia´s got talent, Crystal Wing ...).

She considers awards at national competitions to be the greatest achievements. 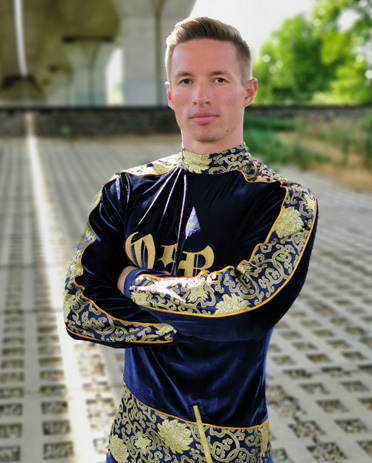 Filip Nemcek has been dancing since he was 14 years old. He is dedicated exclusively to break dance style. In the first seven years of dancing he focused on competitions in Slovakia and abroad as well. He was able to win couple of competitions as 1 vs 1 battle as crew vs crew. After seven years of dancing he decided to take a break from dancing and to focus on building his physique and to study to get several certificates as a personal trainer and fitness coach. After some time he became a successful personal trainer and he was able to move to United Arab Emirates and to coach exclusively the Police of UAE. He never lost his passion for dance and in 2019 he decided to come back to Slovakia and to start with dancing again. The Old School Brothers dance group took him under their wings and now he is part of the main team. Filip is still working as a personal trainer and online coach but now he is focusing on his break dance trainings as well. From Breaking he likes most the style of power moves and freezes. 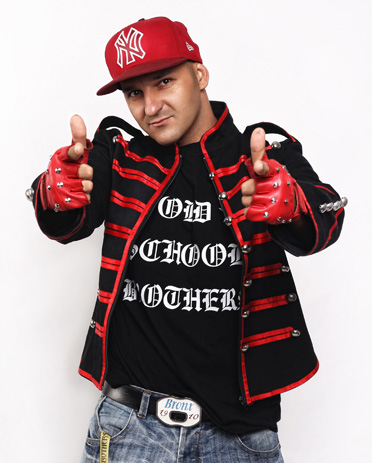 Bboy René’s real name is René Šurda, a founder of OSB. He is a versatile hip-hop personality, who is, except dancing, actively involved in graffiti, body painting ... what he does for living. The first contact with dance was in the year 1997. He started the real training quite late in his 20 years, inspired primarily by US scene,Rocksteady crew through the New York City Breakers. Bboy René is mostly dedicated to breakdance style but also to poppin and lockin style. This OSB member lives for dancing and graffiti and he holds official Slovak record in amount of rotations on head out for one spin.

Your e-mail was added.
E-mail address has been removed.
Want to know what new is happening in our school?

For improving your experience on our sites we use cookies.x